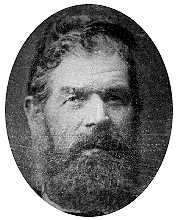 Seely, William Stewart, the first Bishop of Mount Pleasant (Sanpete Stake), Sanpete county, Utah, was born May 18, 1812, in Pickering, Home District, Upper Canada, the son of Justus A. Seely and Mehittabel Bennett. Becoming a convert to “Mormonism” under the instruction of John Taylor, he was baptized in 1838 and migrated to Nauvoo, Hancock county, Illinois, where he resided until 1846, when he became an exile, like his co-religionists, and departed into the western wilderness. He came to Salt Lake Valley in 1847 and lived for some time in Salt Lake City and afterwards in Pleasant Grove, Utah county. When Mount Pleasant, Sanpete county, was re-settled in 1859 he became one of the founders of that place, where he spent the remainder of his years and where he was active in everything pertaining to the growth and welfare of that commonwealth. When Mount Pleasant became an incorporated city, William S. Seely was elected its first mayor, and he acted as Bishop of Mount Pleasant about thirty years. He took part in all the military movements during the Black Hawk war and also filled two missions to Canada, one in 1873 and the other in 1878. In 1868 he went as captain of a Church train as far east as Laramie after immigrants. Bishop Seely married three wives, two of whom survived him. His first wife was Elizabeth De Hart, who died April 6, 1873, after bearing her husband several children, of whom Elizabeth, Emily, Moroni, Emmeline, Joseph N. and Lucinda were still living in 1898. His second wife was Ellen Jackson, whose children are Justice L. and William S. The Bishop’s third wife was Ann Watkins and her children are William A. and Anna R. Bishop Seely was not only a prominent citizen in local affairs, but was well and favorably known throughout the Territory of Utah. He died at Mount Pleasant, Sept. 17, 1896.

See another biography from a different source.