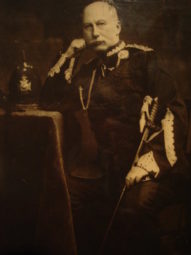 He was also a noted philanthropist. In October 1895 he was presented with the honorary Freedom of the City of Nottingham, for “Eminent services and noble generosity towards the philanthropic institutions of the City.” He was made a Baronet (UK) on the 19th of February 1896. He lived at Sherwood Lodge in Nottinghamshire, Brooke House on the Isle of Wight, and Carlton House Terrace in London. He also built Brook Hill House which J B Priestley, the famous author and playwright, later lived in from 1948. He was a Deputy Lieutenant of Nottinghamshire. He was the Colonel of the 1st Nottinghamshire (Robin Hood) Rifle Volunteers. He was also a Knight of Grace Order of St John of Jerusalem. He was the father of Sir Charles Seely, 2nd Baronet and John Edward Bernard Seely, 1st Baron Mottistone. He was the son of Charles Seely MP, DL. He was the grandfather of Sir Hugh Seely, 3rd Baronet and 1st Baron Sherwood.