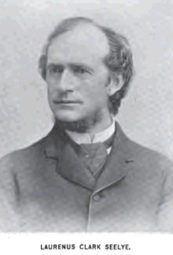 REV. DR. LAURENUS CLARK SEELYE, president of Smith College at Northampton and a prominent educator, was born in the town of Bethel, Fairfield County, Conn., Sept. 20, 1837, his parents being Seth and Abigail (Taylor) Seelye. During his boyhood he studied in the public and private schools, taking a preparatory course for admission to Union College, which he entered in 1853. He was graduated four years later, but remained to take a postgraduate course, which he finished in a year.

He then entered Andover Theological Seminary and studied for two years in the junior and middle classes. Leaving Andover, he went to Europe, and for nearly three years traveled on the continent and in Egypt and Palestine. While abroad he spent one winter in the University of Berlin, and one summer in the University of Heidelberg, after which he returned to his native land. In 1863 he was ordained and installed as pastor of the North Congregational Church in Springfield, one of the largest and most representative churches in the city, and remained in this position for two years, or until 1865, when he was called to the chair of rhetoric and English literature at Amherst College, of which his brother, Julius Hawley Seelye, was president at a later date. That position Rev. Dr. Seelye occupied until 1873, when he was unanimously chosen as the first president of Smith College, an institution for the higher education of women, which was chartered in 1871 and located at Northampton. It is on account of his connection with this college, of which he is still the head, that he is best and most widely known, although he was generally recognized as an able and progressive teacher when a member of the faculty at Amherst. His present field, however, has given him a broader scope for his abilities, and he has ever been alert to grasp every opportunity, when offered, or to make one, when missing. The first college building was dedicated in July, 1875, with appropriate addresses by Governor Gaston, Professor W. S. Tyler, D. D., LL.D., President Seelye, and. Rev. Dr. A. P. Peabody.

The college was opened for the reception of pupils in the following September, and under the able administration of its president the number of pupils has grown from fourteen to seven hundred, while it has happened more than once, in the last few years, that the demand for admission has taxed the institution to its utmost. He has in truth followed the wish of the founder, that the college should grant a degree as high as that of any college or university in the country, and Smith College stands to-day the peer of the highest. With his other duties he has also found time to write some articles on Celtic literature that were published in Putnam’s and Scribner’s magazines, besides several addresses upon educational themes.

He married Henrietta, daughter of Lyman and Harriet Chapin, of Albany, N. Y., in November, 1863, and they have six children living. Both in the educational and the theological work of his life, President Seelye has shown evidences of wide culture, his mind having been broadened by extensive travel and profound research.

Page 74, “Massachusetts of To-Day A Memorial of the State Historical and Biographical”, prepared under the direction of Daniel Toomey, Edited by Thomas C. Quinn, Columbia Publishing Company, Boston, 1892.