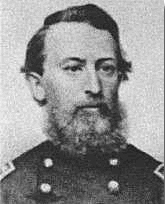 Civil War Union Brevet Brigadier General. Son of Maine Congressman Jonathan Cilley, he studied law and after his admittance to the bar opened a law practice in Thomaston, Maine. At the outbreak of the Civil War 1861, he enlisted in the 1st Maine Cavalry and was made Captain of Company B. On April 14, 1862, he was promoted Major, reported to General Banks command with his unit and was severely wounded in the Shenandoah Valley Battle, Middletown, Virginia, on May 24, 1862.

He later returned to action as Lieutenant Colonel in command of the 1st Regiment Maine Volunteer Cavalry serving with his men untill the end of the war. For his great distinction and dedication to duty he was brevetted Brigadier General of U.S. Volunteers on June 12 1865. After the war he returned to Maine where he was married and resumed law practice at Rockland.