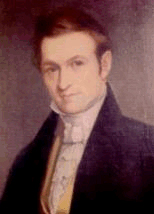 CILLEY, Jonathan, (nephew of Bradbury Cilley and brother of Joseph Cilley), a Representative from Maine; born in Nottingham, Rockingham County, N.H., July 2, 1802; attended Atkinson Academy, New Hampshire; was graduated from New Hampton Academy and later, in 1825, from Bowdoin College, Brunswick, Maine; studied law; was admitted to the bar in 1828 and commenced practice in Thomaston, Knox County, Maine; editor of the Thomaston Register 1829-1831; member of the State house of representatives 1831-1836 and served as speaker in 1835 and 1836; elected as a Democrat to the Twenty-fifth Congress and served from March 4, 1837, until February 24, 1838, when he was killed in a duel on the Marlboro Pike, near Washington, D.C., by William J. Graves, a Representative from Kentucky; interment in Cilley Cemetery, Thomaston, Maine. Biographical Directory of the United States Congress