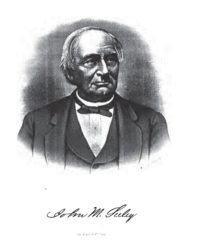 John Mark Seeley, formerly a prominent business man of Housatonic, was born in Great Barrington, April 17, 1814, son of John and Mary (Hart) Seeley. His father, who was a native of Connecticut, settled in Great Barrington and engaged in mercantile business. He also kept the Seeley tavern.

John Mark Seeley acquired a better education than most of the youths of his neighborhood, first attending the common schools in which Squire Seeley was a teacher, later becoming a pupil at the Lenox Academy, and completing his studies at a school in Stockbridge said to have been presided over by Dr. Mark Hopkins. After serving an apprenticeship in a cottonmill at Van Deusenville, in 1847, he engaged in business with Judge Lyman Munson in that village. Later he was interested in the Maple Grove mills at South Adams. Returning to Housatonic in 1856 he was appointed treasurer, agent, and general manager of the Monument mills, founded in 1850, and under his able direction this enterprise became so prosperous that in 1864 a mill for the manufacture of cotton warp was added to the plant. In 1860 he assisted in organizing the Waubeck Mills Company, which engaged in the manufacture of bedspreads, and in 1860 that concern also erected a brick factory for the production of cotton warps. He was a director of the National Mahaiwe Bank of Great Barrington, and the growth and business development of Housatonic was in a great measure due to his superior business ability. In 1864 he was elected a representative to the legislature from Housatonic. He was a member of the board of selectmen in Great Barrington for the years 1863, 1864, 1865 and 1876; was again a member of the house of representatives in 1874, was a state senator from southern Berkshire district for the years 1882 and 1883, and held the appointment of postmaster at Housatonic for thirty years. In politics he was a Republican.

September 20, 1837, Mr. Seeley was joined in marriage with Sarah Montgomery, who was born in Salisbury, Connecticut, December 2, 1813, daughter of John R. and Rachel Montgomery. The only child of this union is Laura E., who is now Mrs. Fuller, and resides in Housatonic. John Mark Seeley died November 16, 1888, and his wife survived him less than two years, passing away October 13, 1890. He was noted for his genial disposition, and widely respected for his many admirable qualities, chief among which was his liberality in contributing toward the support of all charitable objects to which his attention was called. For many years he was chorister in the Congregational church.