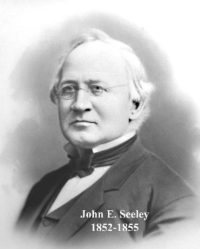 John Edward Seeley was born at Ovid Village on August 1, 1810, the son of John B. and Eleanor Pease Seeley (sic should be Nancy Harger), attended the Ovid Academy and received his degree from Yale University in 1835. He studied law and was admitted to the bar in 1840, was elected Supervisor of the Town of Ovid in 1842, County Judge and Surrogate in 1851 serving four years, and in 1860 and 1864 was elected a Presidential Elector. In 1870 Mr. Seeley was elected to the 42nd Congress of the United States as a Republican, receiving 15,276 votes against 12,134 for Mr. Daniels, his Democratic opponent. On January 20, 1846, he was married to Miss Cornelia DeForest, daughter of Peter DeForest of New York City, who was born on October 23, 1816 and died at the age of eighty-six years. The couple had five children, viz: John Edward Seeley born on November 19, 1846 and removed to Somerset, Niagara Co.; Barnum Dunlap Seeley born on July 29, 1948, married Miss Addie Thomas, daughter of Sylvester D. Thomas and removed to Michigan; DeForest Peter Seeley born on July 25, 1850, married Miss Anna Salyer, elected Supervisor of the Town of Ovid, &c; Goyn Talmadge Seeley born on May 20, 1854 and died on July 2, 1863; and Nancy Eleanor Seeley born on March 27, 1856, who married Dr. G.L. McClune. Hon. John E. Seeley besides practicing law was also a farmer, and died on March 30, 1875.

John E Seeley served from January 1, 1852 to January 1856. Judge Seeley died March 30, 1875. He received his academically education at the Ovid Academy, under the tuition of William Irvin, after which he passed through a full course of study at Yale College, where he graduated in 1835. He then studied law in this village at the office of Hon John Maynard About the year 1836 or ’37 he located at Monroe. Michigan, but returned to Ovid in 1839. In the campaign of 1840, he was a very active Harrison man—was chairman of the town committee. In 1842, he was supervisor of the town In 1848, he acted with the “Free Soil” party, and in 1857 was elected Judge of the county by the united vote of the Democratic and Free Soil Party, running ninety-seven votes ahead of his ticket in this town, He represented this district in the first Republican National Convention, and was the presidential elector for this district in 1860, and again in 1864 and elected to Congress in 1870; was a trustee of Willard Asylum and I think president of the board from its organization, until after he was elected to Congress, when he resigned. In every station of life he was always to be trusted. In all public enterprise he took an active part, and when money was to be raised, he was generally at the head of the list. He was an uncompromising foe to slavery; the black man had no truer friend.