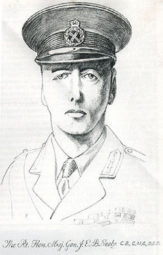 Major General The Right Honourable John Edward Bernard Seely, 1st Baron Mottistone, of Mottistone in Southampton (UK) CB, CMG, DSO, PC, TD. The barony was created on 21st June 1933. JEB Seely was born on the 31st May 1868. He was educated at Harrow School, where he met an older Stanley Baldwin and a younger Winston Churchill, and Trinity College, Cambridge.

Winston Churchill was a lifelong friend and some of their correspondance can be found at the Churchill Archives.

The Times of London called him a “Gallant Figure in War and Politics” and F. E. Smith, 1st Earl of Birkenhead wrote, “In fields of great and critical danger he has constantly over a long period of years displayed a cool valour which everybody in the world who knows the facts freely recognizes.” Ferdinand Foch better known as Marshall Foch, the commander of the Allied Armies in World War 1 gave him a cigarette case inscribed, “Au Ministre de 1912: au Vaillant de la Grande Guerre.”

He was a barrister in the Inner Temple. He served in the Boer War, where he was awarded the DSO Distinguished Service Order in 1900 (despatches, medal with four clasps). He became a Member of Parliament (Liberal) for the Isle of Wight from 1900-06, 1923-24, for Liverpool Abercromby 1906-10 and Ilkeston between 1910-22. JEB Seely became Under-Secretary of State for the Colonies between 1908-11 and War 1911-12. According to the Dictionary of National Biography, “Since his chief, Lord Crewe, was in the Lords, important work fell to the under-secretary, in particular the introduction of the measure which brought about the Union of South Africa. He was then appointed Secretary of State for War from 1912-14 in the Cabinet of Herbert Henry Asquith. With Sir John French he was responsible for the invitation to Marshall Foch to attend the British manoeuvres in 1912 and active in preparing the army for War with Germany. The mobility of the proposed Expeditionary Force and in particular the development of a Flying Corps (the origin of modern day Air Force) were his special interests. According to the Times of London these developments played a significant role in the victory during World War I. The Curragh incident in Ireland (1914) forced him to resign and he instead left England to fight in World War I, becoming a Major General and the commander of the Canadian Cavalry Brigade (he won several medals and merited mention in despatches five times). During the early part of the 20th Century we was well-known for his bravery in battle. After being gassed in 1918 he returned to England as the only member of the Cabinet to see active service in World War I. He was appointed as the Parliamentary Under-Secretary Minister of Munitions and the Deputy Minister of Munitions 1918, then the Under-Secretary of State for Air and President of the Air Council in 1919; he resigned both posts at the end of 1919 when the Government refused to create a Secretary of State for Air (as it later did).

Given his strong reputation to sell ideas he was made the Chairman of the National Savings Committee from 1926-43 (Vice-President 1943), during which time he was asked by the Government to conduct the publicity in regard to the conversion of the 5 per cent war loan. According to the Times of London, “in the Second World War the activities of the National Savings Committee were largely extended and became a vital part of the national war effort.” He continued to have an influential role in domestic politics and due to his influence in the formation of the all-party Government of Co-operation in 1931, Lloyd George called him the “Father of National Government”.
JEB Seely was also an Honourable Major-General, a Colonel of the Territorial Army, an Honourable Colonel of 72nd (Hampshire), an Honourable Air Commander Auxiliary Air Force, Vice-President of the RNLI. He was the Lord Lieutenant of Hampshire (1918-1947). He was a member of the PC Privy Council (1909), and a Justice of the Peace in Hampshire and in the Isle of Wight. He was the 1st Chairman of Wembley Stadium and a director of Thomas Cook.

FAMILY OF POLITICIANS
JEB Seely’s family members were politicians, industrialists and significant landowners. His Father (Sir Charles Seely, 1st Baronet, 1833-1915), brother (Sir Charles Seely, 2nd Baronet), nephew and Grandfather were all Members of Parliament. Charles Seely MP, DL (1803-1887), his Grandfather, was a noted philanthropist and famous for hosting Guiseppe Garibaldi, the Italian revolutionary hero, in London and the Isle of Wight in 1864. JEB Seely’s nephew Sir Hugh Seely 3rd Baronet, and 1st Baron Sherwood, (1898-1970) was Under-Secretary of State for Air in World War 2. His eldest son from his 2nd marriage, David Peter Seely, 4th Baron Mottistone was the last Governor of the Isle of Wight. The family had homes in Nottinghamshire and the Isle of Wight as well as extensive property in London. It is with the Isle of Wight that Jack Seely will always be associated. His favourite uncle, Col. Harry Gore Browne, won the Victoria Cross during the Indian Mutiny. Gore Browne was manager of the extensive Seely estates on the Isle of Wight.
Queen Victoria lived nearby at her favourite residence, Osbourne House.

MEDALS AND AWARDS
He received the following awards/medals: CB Companion in The Most Honourable Order of the Bath (1918), CMG Companion of the Order of St Michael and St George (1918), DSO Distinguished Service Order(1900) and TD.
He was also awarded the Order of the Crown (Belgium), Croix de guerre, Légion d’honneur (Awarded by the President of France, one of the most prestigious French awards and the country’s highest civilian honour) , and the Freedom of the City of Portsmouth in 1927 (UK) .