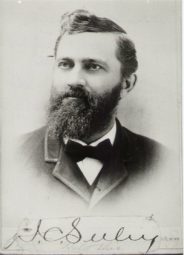 Nearly the entire business life of Mr. Seeley has been passed in Minneapolis. Coming here at the age of thirty years, after a boyhood passed upon a western farm, a collegiate education procured by his own industry, a war experience of thrilling incident in the saddle as a dashing cavalry soldier, and months of cruelest suffering in Anderson prison, followed by a six year’s course in college and law school, he has for twenty years been one of the most active, enterprising and successful business men of the city.

His arrival here was in the beginning of the year 1872. At that time he was a special agent for the Home Life Insurance Company of New York, and afterwards was appointed superintendent of agencies for the states of Minnesota, Iowa and Nebraska of the Security Life Insurance Company of New York. So highly were his services valued by the company that his salary was increased three times to $1,800 and expenses, in a single year. He had desk room in the real estate office of E.S. Corser & Co., where he remained from 1873 to 1879. Here he became familiar with the real estate business, gradually dropped life insurance, and engaged in realty transactions. In 1880 he established the firm of I.C. Seeley & Co., and engaged in real estate, loans and insurance. The firm is now composed of himself, Geo. H. Willard and Chas. T. Harris. Formerly occupying an office in the Domestic clock on Nicollet avenue, the firm is now in a suite of offices on the ground floor of the Boston block, of which they have the care.

The business operations of Mr. Seeley have been of a varied character, of considerable magnitude and attended with rare success. He has erected nearly one hundred houses and stores in different parts of the city, having as a business policy adopted the plan of improving his property and making it productive.

The Domestic block, built in 1880, for Geo. Blake, was the finest building which up to the time of its erection, had been constructed in Minneapolis. It had a handsomely designed gray stone front, was three stories in height, and stands today, an ornament to Nicollet avenue, in the vicinity of some of the finest business structures in the city.

The beautiful resort of Lake Park at Lake Minnetonka was largely planned and the improvement made by Mr. Seeley. Originally designed for a Sunday school assembly, the association fell into financial embarrassment, which was relieved by advances made by him, and another public spirited citizen. The property being purchased by them was completed by a liberal outlay on money, and conducted for several years. It soon became a favorite resort during the summer months, and is one of the attractions of Lake Minnetonka.

Mr. Seeley has indulged his rural taste while carrying on on a gigantic scale one of the fine stock farms which have made the Northwest celebrated throughout the county. “Brookdale Stock Farm” is on the Big Cottonwood near the village of Marshall, Lyon County, Minn. The farm consists of 2,000 acres of prairie and timber, and is equipped with houses, barns, granaries, a feed mill, and all the accessories needed for a farm. Besides the staple crops of wheat, corn and oats, he has gathered the choicest stock of horses, cattle and sheep, which liberal expenditure with careful breeding can procure. This fine domain is not left to the management of hired agents, but has the watchful care and skillful oversight of its owner, who has never forgotten his youthful experience on the Michigan home farm.

The family home is at No. 135 Grant street, a beautiful but not extravagant place.

Though one of the most active among the business men of the city, Mr. Seeley finds time to indulge his philanthropic impulses in abundant labor in church and mission work. He is a member of Plymouth Congregational Church. He was chairman of the building committee of the Young Men’s Christian Association, while engaged in the erection of the elegant building which is the headquarters of that association. He is also a member of John A. Rawlins Post, G.A. R., and the Association of Ex-prisoners of War.

He is also a trustee of Olivet College, Mich., where he received his academic degrees in course, and afterwards the honorary master’s degree.

His ancestors were among the colonial settlers of Connecticut of Pilgrim stock. A branch of the family emigrated to Saratoga County, N.Y., whence Nathaniel Seeley, his father, passed to Michigan, where he taught school, and eventually settled down on a farm. He married Sophia Ann Sherwood, a native of Rochester, N.Y.

Isaac C. Seeley was born January 22, 1843, in the township of Plainwell, Allegan County, Mich. He grew up amid rural surroundings and engaged in rustic labors. He was an active lad, with eyes and ears alert to whatever was passing in the world around him. He was seventeen years old when the presidential election occurred at which Stephen A. Douglas and Abraham Lincoln were competitors, one of the most exciting which has ever agitated the nation. He joined a wide awake club at Plainwell, and drove a wagon to bring voters to the polls. Of course he attached himself to the Republican party. About this time he left home to attend a seminary in preparation for college, and being obliged to provide for himself, he obtained and taught a school near Kalamazoo, Mich. When the tocsin of war sounded throughout the country, calling the young men to arms, himself and another young man, were the first two recruits who put down their names Allegan County. He was rejected as too young to be a soldier. He applied himself again to study and teaching, and after sixteen months again enlisted. He was mustered into the service August 14, 1862, and was assigned to Company “L,” Fourth Regiment of Michigan Cavalry. This regiment has a brilliant record. It crossed the Ohio river at Louisville, and entered into the active campaign of Buell’s army. It faced the batteries of Gen. Bragg, and chased the dashing guerillas of Morgan into Tennessee. It shared in the campaign about the Murfreesboro, and scoured Tennessee, Alabama and Georgia. It shared in the gallant engagements at Mission Ridge and Lookout Mountains, and occupied Chattanooga. At Chickamauga it bore the brunt of the fiery assault of the rebel squadrons, and closed its brilliant record by the capture of the Confederate chief, President Jefferson Davis.

While private Seeley carried a saber and carbine in its ranks it had no less than fifty one engagements, through all of which he passed without a wound or a day in hospital. He was an expert horseman, was young and vigorous, was temperate and watchful, and although almost daily charging the rebel cavalry, or flying before their impetuous attacks, he was never unhorsed or laid off from duty.

On the 20th day of June 1864, Col. Pritchard’s brigade of eleven hundred men, supported by a battery of light artillery, was ordered near Noonday Church, Georgia, to rescue a foraging party that was beset by the rebel cavalry. Advancing for five miles, the advance was stopped by a swamp, across which was a single corduroy bridge, Corporal Seelye was dismounted and sent forward as a videt picket. While lying in his position prostrate, he had discharged his Spencer carbine twenty-one times at fugitive horsemen crossing his line, when a shell burst at his side, fired from the direction of his own camp. Looking behind him he discovered that his comrades had been driven back by a force of ten thousand rebels, and he and his fourteen comrades had been left alone on the picket line. They were picked up and sent to Andersonville military prison. Here Corporal Seeley was in a living tomb, more horrible in its torments than Dante’s Inferno, for six months. The prison sit was a pine and oak grove of twenty acres on the side of hill of red clay. Here 49,485 Union prisoners were received, of whom 12,926 died, mostly from diarrhea, scurvy and dysentery, brought on by exposure, starvation, and impurities of water and foulness of air. After the close of the war Henry Wirtz, the chief instrument of ill treatment, was indicted for injuring the health and destroying the lives of prisoners by subjecting them to torture and great suffering, with several counts reciting barbarities. He was found guilty and was hanged. Corporal Seeley had charge of the rations for a squad of the prisoners, and kept a roll of the dead. During the month of August 2,960 died, and during a single day 180. He was kept at Andersonville prison from June 24, 1864, to September 13th, following. Then he was sent to the Confederate military prison at Florence S.C., where his lot was only a little more tolerable. He was taken out for exchange Dec. 17, 1864. Transferred from Charleston to Annapolis, Md., he was granted a furlough, and went home to Michigan to recruit. But alas! The seeds of malaria had been implanted in his vigorous frame, and no sooner had he reached his quiet home than he was prostrated with typhoid pneumonia. For three months he lay upon a bed of suffering, sometimes wavering between life and death. Careful nursing and a strong constitution at last restored him to convalescence, and after a year’s absence he rejoined his regiment at Nashville, April 6, 1865. But the war was now drawing to a close, and he was discharged at Nashville on the 8th of July, 1865.

In how many ardent young souls did the excitements of arms and the exigencies of military service extinguish the love of letters. Not so with Mr. Seeley. He was now twenty-two, not too old to finish the course of education interrupted by the war. He entered the High school at Kalamazoo, and in the following year entered Olivet College, and graduated in the scientific course two years later. He however, remained an additional year, pursuing higher studies, and working a part of the time in a drug store to pay expenses. He then entered the law department of the Michigan University at Ann Arbor, and after two years of study graduated with the degree of B.L. in 1871. Returning to his native town of Plainwell he studies in a law office. After a year he decided to seek a new location, and went to Milwaukee. Here he was induced to take an agency in the life insurance business, which brought him to Minneapolis in 1872, as stated in the former part of this notice.

Such is the epitome of an active life of forty-nine years. Few exhibit in a greater degree the qualities of native force of character, perseverance, enthusiasm and an unselfish interest in the welfare of others. He has been among the active citizens who have by their boldness and generosity built up the city. He has infused a spirit of energy by his unfaltering courage and above all he had by precept and example enforced the high ideals of Christian manhood. It is gratifying to know that he has achieved fair success in the material accessories of lie, giving him the ability to gratify the impulses of a benevolent and generous heart.