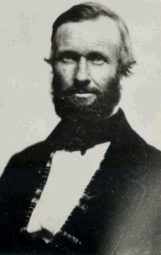 Seeley, Ira O., retired farmer, was the first to make a claim and build a house in Mazeppa township. Mr. Seeley’s parents were of Vermont birth. His father was christened Ajax T., and his mother, born Painter, was called Delight. In 1815 this couple lived in the town of Luzerne, New York, at which time and place the subject was born. While he was yet an infant, the family removed to Ashtabula county, Ohio, where he was reared on a farm till sixteen years old, receiving a limited education at the log schoolhouse of that new region. From the age above named till he came to this state he followed carpenter work. After six years’ residence at Berlin, Wisconsin, he came with his family to his county, in 1853. In June, 1854, he set out with three companions to explore the western portion of the county. In the fall of this year he made a claim on the present site of Mazeppa, and built a log pen to signify a claim. During the winter he piloted several exploring parties to the new region, and built a log house, to which he removed his family in April following. This was the first actual settlement in the township, and was not made on his original choice, but on section 5, on the bank of Trout brook, where Daniel Mack now dwells. In 1869 this place was exchanged for one at that time owned by Mr. Mack, in Zumbrota township, near Mazeppa. In 1881 Mr. Seeley removed to Appleton, Minnesota, his present home, where most of his children live. He was elected to the first state legislature by the republicans, and also served several years as chairman of Mazeppa town board. He was a democrat up to the opening of the civil war. His marriage occurred in 1836, the bride being Miss Sarah Loveland, a native of Ashtubula. She died in 1868, leaving eight children, who still survive. The eldest will be spoken of below. The fifth, Emma, married F. L. Bonney and resides in Smyrna, New York. The sixth, Nellie (Mrs. John McClellan), lives at Mazeppa. She was the first girl born in the town. All the others, named in order below, reside in Appleton: Elizabeth A. (Mrs. O. F. Davis), Robert, Elvira (Mrs. Winfield Greenleaf), Albert and Elmer C. Albert is postmaster at Appleton.

The original pictures are in the Minnesota Historical Society collection.
Copied by Wesley Waring, SGS.
Print(Picture) from Ambrotype of First State Legislature.