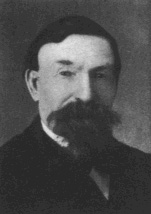 Son of Moses S. Seelye, Sr. was born Jan 4, 1839, at St. George, New Brunswick. At the age of seventeen he removed with his parents to Minnesota, and in May 1855, he went with his father upon his claim in sections 7 and 8 town of Oak Grove, and has since made his home there and on his own farm on the adjoining section 5. From 1855 to 1862 he was in the pineries and on the log drive. August 16, 1862, he enlisted at Fort Snelling, in Co. A, Ninth Minnesota Regiment, and the company immediately started in pursuit of the Indians who had been engaged in the massacre which had just taken place. At Camp Release (near the present site of Montevideo) 120 women and children were released about October. The company wintered at Fort Ridgeley, 1862-63. As soon as the grass started they went northwest as far as Bismarck, fighting seventeen battles on the way. In the fall of 1863 the troops drove the Indians across the Missouri river. General Sully’s command then took charge of the Indian fighting, and Sibley’s command returned to Fort Snelling. About Nov. 1, 1863,the company went south. Half the regiment was lost at the battle of Guntown, Mississippi. Mr. Seelye was wounded and captured at that battle. He was a prisoner seven months and was then exchanged. He was mustered out May 29, 1865. Worked at lumbering several years. Kept a hotel at St. Francis four years, beginning in 1880, since which time he lived on his farm, known as Woodlawn farm. He has 80 acres in section 5, a part of the original McKenzie claim. Mr. Seelye has been twice married. Aug. 16, 1865, he was married to Minnie Pease, who died five months later. His wife Jennie Bogart, he married Nov. 20, 1867. They have two children, twins: Jennie E. (Mrs. Amadorus Morton) Minnie E. (Mrs. Edward Morton). Mr. Seelye is the earliest living settler of Oak Grove, having turned the first sod and assisted in building the first house in the town.