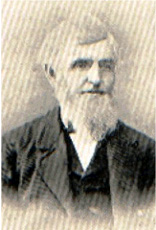 The Seely family one of the oldest and most numerous families in the vicinity of Chester Gabriel Seely is one of it oldest members. He has the honor of being the oldest and possibly the most spiritual man in the present session of the Church. He was born August 10th, 1819, the same year as Queen Victoria. His life, however, has been spent in a much less conspicuous sphere He began his life in the now spacious home of Mrs. Thaddeus Seely, his sister-in-law. He is the sixth child in a family of seven born to Thaddeus and Elizabeth Roe Seely, and was noted for his nervy, frolicsome boy life. He was not satisfied with the humdrum of farm life at first, but slowly settled down to make himself one of the most progressive farmers of his community.

His parents were bent on giving him the advantages of an education. He was sent to the public school at Summerville and Chester. Later he attended several academies, viz., the one at Florida, N. Y., the one at Montgomery, N. Y., under Prof. Tucker, and the academy at Ridgebury, N. Y., while the late Governor Bross was teaching.

He has attended service in all three of the Church buildings, pictures of which are to be found in this book. There was no railroad here when he was a boy and all the farm produce had to be driven to Cornwall, and shipped to New York by way of the Hudson. Some of the wood for the first steamboat was purchased of his father, and it is with deep interest that he looks hack over the vast strides forward that have been made in his lifetime.

His childhood’s home was not the most religious in Chester, and he was a little inclined to be worldly and reckless. But the Lord had another purpose in regard to him. In 1837 the Lord led Timothy Lester this way to assist Rev. Mr. Beach, then Pastor of the Chester Church, in conducting revival services. A very deep interest was awakened, and among those who accepted Christ and united with the Church, was Gabriel Seely.

He was married four years later, on September 9th, 1841, to Eliza Ann Gardner, daughter of Ira Gardner of Gardnersville, N. Y. One visit to the West satisfied him to remain in Orange Co.

In the year 1842 he moved into the now large well-furnished farm-house, where he lives, near Chester. It was quite small when he moved into it, but he has added to it as necessity demanded and means would permit.

There were six children born in the home. Two still abide with him and keep the home-Miss Martha Seely and Mrs. Belle Masterson, now a widow, and her only daughter Adele.

Mr. Seely, while an active man for one who has almost touched the threshold of the four score years, feels sorely the loss of his life companion, who died March 2nd, 1896.

While Mr. Seely has not been a great accumulator of money, he is recognized as one of the leading farmers in this part of the country. His farm is naturally a productive one and in Mr. Seely’s palmy days held the first rank as a milk producing farm. Such a position is only won and held by hard labor and progressive investments in the latest improvements. During all these years Mr. Seely has not been idle in the Master’s Kingdom. Quietly seeking with the Pastor in the secret chamber the outpouring of the Spirit and the Salvation of his fellow-men, he has witnessed many answers to his prayers.

Mr. Seely is a Republican in politics and a staunch advocate of temperance. So exemplary had his life been since uniting with the Church that he was elected to the eldership in 1858, in which relation he has served ever since with the greatest acceptance. He has attended the meeting of the New York Synod in Boston and Brooklyn, and has frequently represented the Church in other places. His interest in the Church was never greater than at present, though he is able to attend but little. His silvery locks and piercing eye lead you to think of the Elders that bow around the throne of the Lamb. He has been in the furnace of affliction.

Adversity is the diamond-dust Heaven polishes its jewels with.”