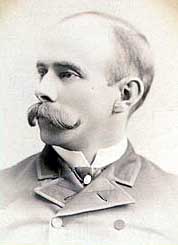 Elected to Hall of Fame by Committee on Baseball Veterans: 1999

A balding little man with a modest demeanor and a formidable mustache that gave his face a melancholy cast, Frank Selee compiled the fourth-best managerial percentage, .598, in baseball history. His Boston teams won five pennants. In a sixteen-year career he never finished lower than fifth. Twelve of his players are in the Hall of Fame, and a good case can be made for five or six others. Selee himself was posthumously inducted in 1999.

One of the most successful field managers in the history of the National League, Frank Selee led the 19th century Boston Beaneaters (1890 -1901) to five pennants (1891-93, 1897-98) and transformed the struggling Chicago Cubs (1902- 1905) into champions. During his 16 years as a manager from 1890 to 1905, his teams fashioned an outstanding .599 winning percentage, the fourth highest of all time. Known as an impeccable judge of talent and an adept handler of players, he was the architect of the Cubs’ famous double play combination — Tinker-to-Evers-to-Chance.

His teams were expert at such maneuvers as the hit-and-run, the 3-6-3 double play, and defensive shifts and signals. Yet his most remarkable talent was recognizing not only a player’s potential, but the proper position for him to play. In his three-plus years remaking the Cubs, losers since 1886, he converted, among others, catcher Frank Chance to first base, shortstop Johnny Evers to second base, and third baseman Joe Tinker to shortstop.

In 1905, desperately ill with tuberculosis, he surrendered the team to Chance. Chicago won pennants in four of the next five years. Of thirteen key players on the Selee squad Chance inherited, eight still were regulars in 1910.)