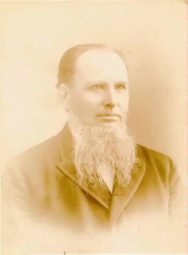 From: Pen Pictures from the Garden of the World or Santa Clara County, California, Illustrated. Edited by H.S. Foote, Published, Chicago: The Lewis Publishing Company 1888. Pages 240-241

Charles R. Seely was born in Cattaraugus County, New York, in 1830. His parents, Norman B. and Lydia (Crook) Seely, were natives of New York. In 1835 his father moved to Whiteside County, Illinois, and in 1840 removed to Jones County, Iowa, where he pursued the occupation of a farmer. He was also the owner of a lumber mill. The subject of this sketch was educated in the common schools, and reared as a farmer. When nineteen years of age he rented a farm and entered into business on his own account as a farmer and stock-raiser. In 1849 Mr. Seely was united in marriage with Miss Salena Southern, the daughter of John and Elizabeth Southern, natives of Virginia, but residents of Tipton, Cedar County, Iowa. In 1853 he came by the Isthmus route to California. Upon his arrival in San Francisco he proceeded immediately to Dorado County, and in connection with his father purchased a hay farm. After one year he sold out his interest in this farm and engaged in the occupation of freighting supplies from Sacramento to the mines. In May 1855, he returned to his home in Iowa, where he remained until 1857.

In this latter year he came overland to California, bringing his family with him, and located in Solano County, where he purchased two hundred and forty acres of land. For the next ten years he resided there, devoting his land to the production of grain and to raising stock. In 1867 he returned to the old homestead in Iowa, upon which he made extensive improvements, with the design of spending the remainder of his days there, but the delights of California climate and the varied productions of its soil induced him to change his mind. In 1869 he again crossed the plains with his family, located in Solano County and purchased six hundred and forty acres of land. His title to this land proved worthless, and after two years’ residence there he removed to Stanislaus County, and purchased one thousand four hundred and sixty-one acres of land, most of which he devoted to grain. He resided upon this land until 1881. Desiring a change of climate and an easier mode of life, in the latter year he removed to Santa Clara County, and located in San Jose. In 1886 he purchased a fine orchard property and home on Bascom Avenue, about one mile south of Santa Clara. There are forty-eight and one-half acres in this tract, all of which is in orchard except that portion occupied by his beautiful residence, extensive grounds and out-buildings. Among the latter is a fruit-dryer, with a capacity of three tons per day. His orchard is one of the finest in that section of the county, and Mr. Seely is an enthusiast in his new occupation. He has sixteen acres each of apricots and French prunes. His orchard is also producing peaches, pears, plums, cherries, walnuts, almonds, and figs.

Mr. Seely has made a success in his farming operations, and has secured a competency. The same intelligent and energetic principles applied to his calling as an orchardist, coupled with his sound business views are bound to produce like results. He is a consistent member of the Methodist Church. Politically a strong Republican, he is still liberal and conservative in all political actions.

Of the thirteen children from the marriage of Mr. and Mrs. Seely, but eight are living, viz.: Martin B., Mary Belle, Hattie, George B., Gertrude, Charles R., Alice, and Lillie. Martin B. married Miss Emma Mahoney. Mary Belle married Augustus Stewart (Note: Christine Havnar; great-grand-daughter of Charles R. Seely, notes that the correct married name for her step grand-aunt was Stuart, NOT Stewart.). Hattie married Frank Coats. George B. married Miss Margaret Turner. All the above are residing in Stanislaus County. Gertrude married Charles Blaisdell, now deceased. Mrs. Blaisdell and the other children reside with their parents.