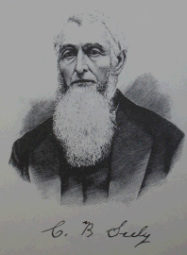 Thaddeus Seely, grandfather of Charles B. Seely, was one of the early settlers of the present town of Chester, and had his homestead about one mile south of the village, the farm being occupied in 1881 by Thaddeus Durland. By his first wife, who was a Miss Seely, he had three children, – Joanna, wife of Charles Board, of Ringwood, N.J.; Thaddeus; and Peter, who died young. His second wife bore him one son, Gabriel, who resided on the homestead and there died. By his third marriage he had no issue. Mr. Seely was a large farmer for his time, and among the early members of the Presbyterian Church of Chester. His son Thaddeus, father of Charles B. Seely, was born on the homestead, Aug. 15, 1782, and died Nov. 12, 1841. His wife was Elizabeth, daughter of Nathaniel, and granddaughter of Nathaniel Roe, the first settler of the Roe family in the town of Chester in 1751, whom he married Dec. 15, 1805. She was born April; 24. 1787. and died Sept. 20, 1874. Their children are Joanna, died young; Edward, of Illinois; Mary, wife of George S. Conkling, of Goshen; George, died at the age of ten years; Charles B., Gabriel, and Thaddeus, farmers, occupying the homestead of their father; Elizabeth, died young. After his marriage Thaddeus Seely purchased 100 acres of land where his son Thaddeus now resides, and afterwards added to it some 300 acres. He was a thoroughgoing business man and a progressive farmer. He never sought the public places in his town, but led a quiet and unostentatious life.

Charles B. Seely, son of Thaddeus, was born June 19, 1817, and married, Oct. 19, 1842, Hannah Jane, daughter of Benjamin C. Coleman and Eleanor Vail, of Goshen. She was born Nov. 1, 1817. Her mother was a daughter of Gen. Abram Vail of Goshen, and her paternal grandfather was Benjamin Coleman. The children of Mr. Seely are Ella; Fred B., who carries on the Chester flouring-mill; Hannah C., died, at the age of fourteen, June 2, 1863; Mary Frank, died at the age of twenty. April; 25. 1872; and Charles A. In 1845, Mr. Seely purchased a farm of 125 acres near the Otterkill depot, to which he added other land, making 216 acres. This is carried on until 1864, when he sold it, and purchased a small place on the road from Goshen to Chester, where he remained for ten years. In 1874 he purchased a farm in the town of Chester, containing then 160 acres, including a part of the valuable Black Meadows, a part of which he has sold, retaining 127 acres, his present homestead.

Mr. Seely, like his forefathers, has led an uneventful life, unbroken by the bickerings of office-seeking or public place. He may well be ranked with the representative agriculturists of his town; is a promoter of all worthy local objects, and a man of practical ideas. His wife is a member of the Presbyterian Church.

Pages 627-628, “History of Orange County New York with Illustrations and Biographical Sketches of many of its Pioneers and Prominent Men,” compiled by E.M. Ruttenber and L.H. Clark.