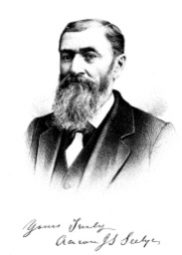 It is not every man, even in a country so rich in resources as Michigan, who can start in poverty and make a financial and social success in life; but the list of those who have done this is a remarkably long one, and even among these we find a very considerable number who have added to this success the attainment of intelligence and a rich store of information, besides the acquirement of an influence which makes them marked men in the community. Such a man is Mr. Seelye whose sketch we now give, and whose beautiful home in Davison Township, Genesee County, is an ornament to the county.

Our subject was born March 7, 1831, in Charlton Township, Saratoga County, N. Y., to which his father, Abel Seelye, a native of Connecticut, had come at the age of twenty-one. He was a maker of spindle wheels, but followed farming most of his life and came to Michigan in 1837, where he located nearly six hundred acres of Government land in Atlas Township. His son, Andrew J., the first white settler in this township had preceded him the fall before, and the father moved into the house which that son had built. Their coming here was soon followed by the settlement of other families, and they began to have other neighbors besides Indians, deer, bears and wolves. The father, who helped to organize the township and was its first Justice, died in 1863 at the age of eighty-one. He was a highly respected and well-known man, a great student of the Bible, and was connected with the Cumberland Presbyterian Church.

The Seelye family is descended from five brothers who came to America from England prior to the beginning of the eighteenth century. The mother of our subject, Abigail Seelye, did not change her name in marriage, as she was connected with a distant branch of the family. She died in 1861 in her seventy-fifth year. Eight of her ten children grew to maturity, and two are now living.

All the schooling which Aaron Seelye received was in New York before coming here at the age of seven, with exception of fourteen days when he studied in the log school house at the age of fourteen; and his truly excellent culture and intelligence are the result of his persistent study. At the age of twenty-two he began independent work, taking a season at carpentering. He then opened a general store on section 34, on the 10th of November, 1853, it being the first store in the township. For eight years he thus carried on a successful business, combining with it the manufacture of potash, and at the same time cleared and improved forty acres of land which he had purchased. He closed out his mercantile business in 1861, but continued his potash manufacturing for thirty years, and in 1860 purchased additional land.

In 1856 Mr. Seelye was united in marriage with (Grace Thomas, a native of England, who came with her parents to America in 1837. Their one child, Elizabeth A., is the wife of Freeman Sweers, who is a farmer in this township. The early political preferences of Mr. Seelye brought him into the Whig party and later lie became a Republican. He has served some three years as School Inspector, and for three terms served as Township Treasurer, and besides being Highway Commissioner for several years, he is now Justice of the Peace. For two years he was also on the Republican County Committee. He is deeply interested in the Pine Grove Cemetery Association, and has served as its President, Treasurer and Clerk. Upon his fine farm of four hundred and thirty acres he raises all kinds of stock, making a specialty of fine wool sheep and Short-horn cattle. The attention of the reader is invited to the lithographic portraits of Mr. Seelye and his estimable wife, which appear in this connection.