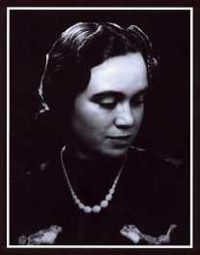 Mabel Seeley, the author of The Crying Sisters (1939) and six other mysteries, is nearly forgotten these days, but in the 30s and 40s she was a popular crime writer who received rave reviews from such arbiters of literary fashion as the New York Times, the Saturday Review and the New Yorker. Her novels were published by Doubleday and distributed by The Crime Club. The Chuckling Fingers won the Mystery of the Year award in 1941. Then in the early 50s, Seeley gave up writing to focus on her new marriage.

MABEL SEELEY wrote seven mysteries between 1938 and 1954, all of them wonderful period pieces set in the Midwest. Her books received rave reviews when they were first published in New York, and they remain every bit as good today.

The Crying Sisters was Mabel’s second book, written in 1939 when she was thirty-six years old. She had already spent ten years writing advertising copy when, in 1936, she “retired from a profession paced too fast for me, determined never to put pencil to yellow paper again.” The next year she was at work on her first novel, The Listening House, which brought her immediate critical and popular success.

In The Crying Sisters, a “Crime Club Selection,” the author sets the atmosphere and characters for this compelling story in her opening words: “I still pinch myself and say it isn’t true. I still wake at night to reach for the tangible proof within touch of my hand. Because what happened to me last August went so far outside anything I’d known all the rest of my life that even while it was going on I often thought I must be imagining.

“The Chuckling Fingers: A Mystery”

Weird and strange events are happening at the Heaton family estate on lake Superior in Minnesota. A boat is smashed, a bathrobe is slashed, a car moves on its own and people are murdered. As evidence points to insanity in her cousin Jacqueline, Ann tries to uncover who is really behind these terrible tricks. After a series of dead ends and terrifying experiences where no one can be trusted, this suspenseful mystery comes to a surprising and unpredictable end.

Mabel Seeley was enormously popular in the 1940’s. Her novels were published by Doubleday in New York and distributed nationally by The Crime Club. The Chuckling Fingers was promoted as the mystery of the year in 1941.

Wealthy Minnesota widow Gail Kiskadden, devastated by the recent death of her son Johnny, welcomes his mysterious–and impregnated–young wife into her home only to be invaded by the “undesirable acquaintances” of the girl’s past. As Gail becomes more and more entrenched in these dubious circumstances, she begins to wonder if the girl’s baby is, in fact, Johnny’s, and, worst of all, if the girl was somehow involved in his untimely demise.

St. Paul Pioneer Press, 1950
Readers who like to sit tremulously on the edge of their chairs should be happy to know that Mabel Seeley has written another of her celebrated murder stories. As usual there are many sharp twist and surprises, all part of an ingenious plot construction.

Book Description
The Beckoning Door concerns Cathy Kingman, quiet enough to meet, but deep in revolt against circumstances which kept her in the little Midwest town of Long Meadow. Her resentment extended to her cousin Sylvia who, having inherited the estate that Cathy wanted, returned to Long Meadow and callously broke up Cathy’s romance. Then Sylvia hinted that she could open the door to the outside world, and Cathy thought the moment of escape had come. But-a fortuneteller prophesied that Sylvia would not live long, and the prophecy came violently true. The town, knowing the jealously that existed between the cousins, jumped to a quick and easy accusation. Cathy knew that to prove her innocence, even to those who loved her best, she must find the murderer. Suddenly, terrifyingly, Cathy realized that she herself was the hunted. It was just a question of time and wits whether she would find the murderer or be the next victim!

The Listening House (1938) The writing is neither hysterical, nor especially concerned with personal relations. The first 70 or so pages are closely tied to mysterious events happening in a decrepit old house that has been carved up into apartments. Both the house itself and the dramatic events that take place there are fairly well imagined. These segments show the strong influence of Mary Roberts Rinehart’s The Circular Staircase, as various intruders keep trying to get into the house, and as mysterious nocturnal events keep happening. After this, the novel drifts off into a deep and dull investigation of hidden past crimes, all of which, through a tissue of unbelievable coincidences, turn out to be relevant to present events. The house succeeds as a Golden Age architecture extravaganza, (I just love the unusual buildings that are always getting explored in Golden Age mysteries), and the creepy initial events are not bad as melodrama, but the book never really takes off at all as a puzzle plot mystery. Years before Steve Thayer’s Saint Mudd, Seeley’s book reminds us that the Minneapolis-St. Paul area was once one of the most corrupt in North America. It makes Chandler’s “Bay City” look saintly. This book also shows the somewhat startling realism about matters of sex, mistreatment of women, etc., displayed by the HIBK novel of the era. It’s a tradition that mixes feminism with realism, even naturalism.

Copyright 1947. “Frieda Schlempke, daughter of immigrant parents, was born in a small town in the Middle West in the late 1800s. From poor beginnings, from a house brutalized by a boorish father, from complete social ostracism, Frieda slowly and steadily fought her way to wealth and position through an exclusive dressmaking establishment that she built. Gradually, Frieda’s obsession with money became an overpowering thing, conquering the one genuine love she ever admitted.” 399 pages.

“The Stranger Beside Me”

This is the story of a strangely idealistic marriage, hindered by success as well as failure. It is a sensitive and compelling love story told in exciting counterpoint to the colorful behind-the-scenes history of a large department store, complete with personal rivalries, sharp business practices, and constant readjustments to meet the demands of changing customs and modes. 272 pp.