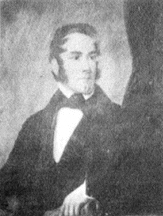 ELIAS PETTIT SEELEY (November 10, 1791 – August 23, 1846), governor of New Jersey for seven months in 1833, was born in Deerfield Township (later Bridgeton), the son of Ebenezer and Mary (Clark) Seeley. His father, a merchant and a life-long Cumberland County resident, served for many years as a Jeffersonian-Republican legislator.

Elias Seeley was educated informally. After studying with a local attorney, Daniel Elmer, he was licensed as a lawyer in 1815. According to Lucius Q.C. Elmer, a contemporary from Cumberland County, the younger Seely “never attained much celebrity as an advocate, but had a good local practice as an attorney and Conveyancer.”

On March 6, 1816, Seeley married Jane E. Champneys. The couple had two children, Elias P., Jr., and Rebecca. Until the late 1820s, when he ran successfully as an anti-Jacksonian for the legislative council from Cumberland County, Seeley was not active in politics. Reelected three times, he was named vice-president of the council late in 1832, when his party’s governor, Samuel L. Southard, left office for the United States Senate, in February 1833, the legislature designated Seeley to succeed him. Along with Seeley’s name, the National Republican’s lack of certified state leaders, especially from West Jersey, dictated the selection.

No one could claim the Seeley had the political stature of his gubernatorial predecessor. Introducing him to the public, the National Republican Newark Daily Advertiser called Seeley “an amiable man,” a characterization the Jacksonian press exploited in the weeks subsequent to the appointment. The Trenton Emporium & True American expressed satiric delight that the new governor was “amiable,” and proceeded to inquire whether this “amiable” man was capable of performing his duties on the court of appeals, of negotiating the loan of $30,000 the legislature had authorized for a new prison, or of serving effectively as a trustee of the College of New Jersey (later Princeton University). The Newark New-Jersey Eagle was more pointed: it cited his “total unfitness” for the office. For this, Emporium & True American editor Stacy G. Potts offered, “the party is condemned, not Mr. Seeley,” since Seeley had achieved the governorship “not through his own ambition but by the force of circumstance.”

As governor, Seeley was more a political target than an active public administrator. Since he was not elected until the close of the legislative session, he was limited as chief executive to making certain appointments (for example, negotiators in a boundary dispute with New York State and compilers of civil and criminal laws in New Jersey), serving on the final appeals board of the state, and preparing an address to the legislature after the October elections.

In fact, Seeley participated in one important case as presiding officer on the court of appeals (composed of the legislative councilors and the governor): the Hicksite case, a dispute between competing factions of the Society of Friends. For several years New Jersey Quakers had been at odds over matters of doctrine and discipline, and by the late 1820’s the contending forces had reached a point of no return. Quaker liberals, or “Hicksites” (a derivation from Elias Hicks, a notable Quaker liberal), broke away from the orthodox establishment. This involved a financial settlement and led to the case decided in 1833 by Seeley and the court of appeals. Although the wrangling in court and out was prolonged, the facts of the case are relatively simple to abstract. The Hicksites in Crosswicks demanded the remittance of their share of the contributions to a school trust fund administered by the Society of Fiends. The orthodox, maintaining that they needed to make no concessions to schismatics, refused. Hence the court test. The case was first argued before Chief Justice Charles Ewing and Associate Justice George K. Drake of the state supreme court, sitting as masters in chancery. George Wood, perhaps the state’s leading attorney, and former Governor Isaac H. Williamson argued for the orthodox, while Garret D. Wall, a leading Jacksonian attorney and politician, and Samuel L. Southard, New Jersey’s preeminent anti-Jacksonian politician, argued the Hicksite cause. After lengthy proceedings in a packed courthouse (the “Quaker Case,” as it was called, was followed widely in New Jersey and Pennsylvania), the justices decided in favor of the orthodox. They concluded that since the Hicksites were in fact “seceders,” they were entitled neither to be considered Quakers not to regain their school fund contributions.

Matters did not rest there. The decision was appealed to the court of last resort in New Jersey, the court of appeals, with Governor Seeley presiding. In the arguments before this body, Theodore Frelinghuysen replaced Williamson as advocate for the orthodox. The other attorneys and the end result were the same. With a 7 – 4 vote (across party lines), the court affirmed the decision of Justices Ewing and Drake. In a statement issued with the decision, Seeley, who had voted with the majority against the Hicksites, expressed regret that such “religious controversies” should be brought into the court, and urged both parties to seek some accommodation on their own.

The decision had important political ramifications. The New Jersey Quakers, with a clear majority of liberals, had been staunchly anti-Jackson since 1824, and thus were a bulwark of the National Republican organization in the state. Having taken their case to a body controlled by their longtime allies, the Hicksites were grievously disappointed at the outcome. It broke their allegiance to the National Republicans, especially when Jacksonian politicians in West Jersey, where Quakers were most numerous, identified with the Hicksite cause. This strategy, with excellent organization, paid off for the Jacksonians in the 1833 legislative elections. They won an overwhelming, statewide triumph, including victories in Burlington, Monmouth, Salem, and Gloucester counties – all National Republican strongholds. Seeley’s failure to “inspire confidence” among East Jersey Whigs, according to one historian, also helped reduce the turnout of traditionally anti-Jacksonian voters and therefore figured in the Jacksonian victory in New Jersey.

Once in control of the joint meeting, the Jacksonians wasted no time replacing Seeley as governor with Peter D. Vroom, Jr. Seeley ended his tern with a message on the state of the state. In it, he commented ably on the results of the operations of the state prison, the increase of the school fund, the treasure accounts, and the progress of the construction of the new penitentiary. He offered the usual litanies on the value of public education, suggested legislation (not detailed) to relieve problems resulting from the influx of “coloured persons” in the state and, like his two most recent predecessors, urged that the current militia system be replaced by a volunteer system with inducements. Seeley’s strongest words opposed public executions. “The oftener a person frequents these public exhibitions,” he observed,

the less impression they make on the mind; and they can witness the melancholy spectacle with less dread and horror, and in a little time can follow their fellow men to the fallows and witness the death scene with perfect composure. It would be better for many other reasons that might be named, that public executions should be dispensed with, and the law be so amended or modified; that in the future they shall take place within the walls of the prison yard, and in the presence of the sheriff and the Officers of the Court.

The newspapers of both parties endorsed Seeley’s words on public executions, and the National Republican press widely hailed his message in general. The Hunterdon Gazette called the address a “plain sensible document,” while the editor of the Trenton New-Jersey State Gazette observed that

the manner in which this respectable man was treated by some of the low party papers, during the time he served as Governor of the State, cannot but recur to the minds of many of our fellow citizens, at this time, with regret. The duties which devolved upon him by the constitution and the laws, he certainly discharged with ability and success. His conduct throughout that period was modest, dignified and impartial, and has left a very favorable impression upon the minds of many of his fellow citizens.

It is perhaps ironic that in performing his one notable act as governor – casting a nondecisive vote consistent with his concern for the public welfare in the “Quaker case” – Seeley greatly damaged his party’s chances of maintaining control of the state in 1833. No one, however, seems to have blamed him. With the change in political control in Trenton, Seeley returned to the private practice of law, and he later served several terms in the legislature with no particular distinction. He died of cancer in 1846 at the age of fifty-five. At the outset and end of his brief period in the political limelight, he was a decent man who was less a shaper than a creature of circumstances.